Sony drops the news that their upcoming console will be weak in the media format supporting department, and cause a little Internet spurn.

The PlayStation 4 is a videogame machine through and through. Probably more so than it’s predecessor in an unintentional, launch-day firmware priorities way. Over the week the PlayStation Blog posted a rather extensive FAQ for the PS4 and its many system-wide nuances, how Remote Play works, what’s up with online multiplayer (which, remember you’ll need a PlayStation Plus subscription to access), and other interesting facets.

One such question and answer that got the most attention though, and caused a bit of an Internet flare up, was the PS4’s non-support of MP3 playback and streaming via DLNA (short for Digital Living Network Alliance, a digital format standard that enable devices to share photos, videos, and music with each other.) Coming from the PlayStation 3, which I know a ton of folks regarded as their media center of choice this past generation with its bevy of media-playing bells and whistles, this was pretty disappointing news.

Add that with the peculiar “it’s okay guys, you can use our (Sony’s) Music Unlimited service for $4.99 a month as your custom soundtrack playlist instead” messaging from Sony PR, and well, this whole ordeal started to reek of complete marketing bull-pucky; trying to gently push people into subscribing into Sony’s own streaming music service with no other alternative in sight, which is sneaky smart. Of course, that may just be a cynical theory to take, and we should at least give Sony some benefit of the doubt on this matter. 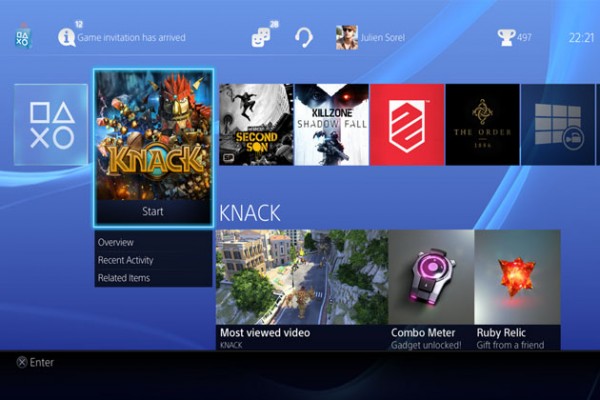 Reading through all the online chatter and from people behind the scenes, perhaps the better motive for why the PlayStation 4 lacks MP3 support and DLNA streaming, is due to Sony’s production schedule for the console itself. It’s a dirty secret, but in order to have a grand allotment of consoles ready for launch day (which is something I’m sure Sony wants), sometimes you have to ship products in a less-than-complete state. Purely on the firmware end though, which is why so many electronics have day-one firmware updates.

This, from what I’ve heard, is certainly no different in this case. I mean, for Pete’s sake, there’s a 1.50 firmware update on the PlayStation 4’s launch that adds almost every console feature Sony’s been touting about for months: PS Vita Remote Play, background downloading, heck, even software functions for the Share button on the DualShock 4. There won’t even be the PS4’s “suspend and resume your games later” feature either at launch, which is being included in a firmware update down the line. Good grief, indeed.

Yup, long gone are the halcyon days of the SNES and the original PlayStation where you paid for what you got. No missing features, no day one patches of any sort. Sadly, it’s just an unfortunate reality of today’s modern “got to meet shipping numbers” technology, and not an issue with Sony alone. Thankfully, the silver lining in all this – if you can even call it that, but whatever – is that at least with future firmware updates things can be fixed. And that could certainly happen here with the missing MP3 playback and DLNA support. 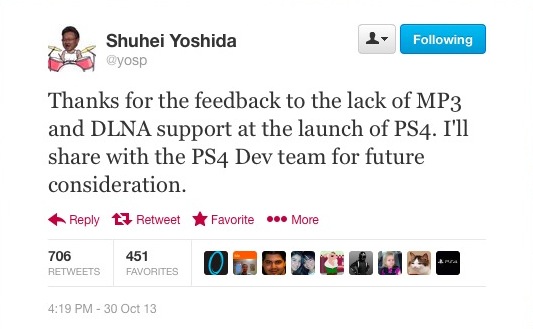 After all the social media outroar over this issue, Sony Computer Entertainment President Shuhei Yoshida took to Twitter and stated that he would discuss MP3 and DLNA support with the PlayStation 4’s development team “for future consideration.” That certainly was nice of him to respond, especially with mere weeks away from the PS4’s launch, and hopefully this means a fix will be on its way. When though, is bigger matter, but perhaps when Sony issues the next firmware update after 1.50 – that should include the “suspend/resume” feature – they will throw in those items as well.

In case they somehow forget or quietly back away from this little mess though, be sure that there will be plenty of people online to complain about it until they do. And when that happens, be assure that you’ll know about it here on PS3Maven, along with PlayStation 4 commercials, and what PS4 packaging will look like for launch day.