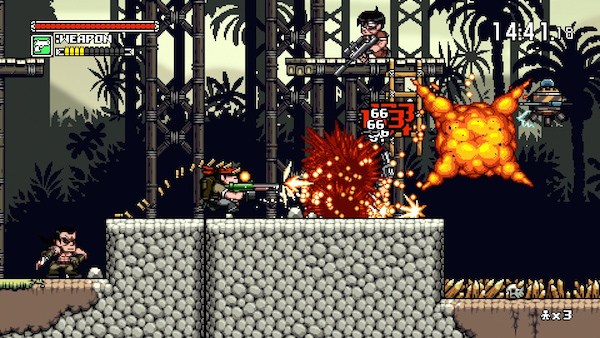 If there’s one staple of the side-scrolling gaming format that I’ll always have room in my heart for, it’s the “run and gun” genre. Think Metal Slug or Gunstar Heroes. That’s why I’ve been keeping my eyes on Tribute Games’ Mercenary Kings, an indie game within the same gaming class that’s soon heading its way onto the PlayStation 4 on April 1.

The first thing to notice about Mercenary Kings is the amount of graphical pop across the screen. The sprite work is insanely detailed, which considering the game’s pedigree, shouldn’t come as a total surprise. Previously, Tribute Games worked on Scott Pilgrim vs. The World: The Game, a game with same high level of pixel artwork (and also quite fun).

Gameplay wise, Mercenary Kings should offer a crunchy 2D action feel, where players can recruit other players (squads up to four) to complete Rambo-esque missions by eliminating waves of enemy troops and mechanized bosses. Then, you can use your vanquished foe’s dropped weapons to upgrade you own and assemble the best firearm to get the job done.

Mercenary Kings arrives for the PlayStation 4 next month, April 1, for the price of $14.99. Here’s hoping a PlayStation Vita version is also in the works, because it would be absolutely superb to see those impeccable sprites running on Sony’s handheld.