‘Lollipop Chainsaw’ Announcement Trailer, Give Me A ‘Z’ For Zombie Hunting

Grasshopper Manufacture’s next game, Lollipop Chainsaw, gets a debut trailer. Get ready for a batch of crazy hack-and-slash action that you’ll cheer for! 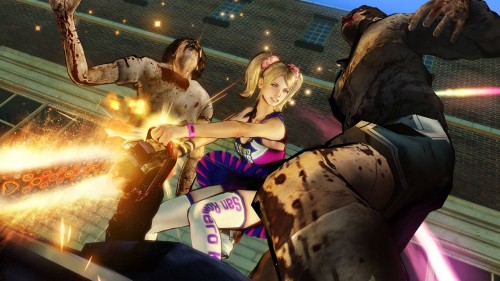 “From the twisted mind of Suda 51” a.k.a Goichi Suda is right. Only he, the creator of such wild games like No More Heroes, along with the help of Hollywood director James Gunn (Dawn of the Dead,) could come up with the concept for Lollipop Chainsaw. And believe me this title, published by Warner Bros. Interactive Entertainment, is classic Suda 51.

A cheerleader, a chainsaw, and zombies. That’s really all you need to know. Okay, okay more details — Lollipop Chainsaw stars Juliet Starling, a spunky cheerleader at San Romero High School that’s now become the breeding grounds of a zombie infestation. Armed with a chainsaw (duh) and her acrobatic skills, Juliet is the only one who can take them down — in her own rainbows and glittery way.

Sold yet? The answer should be a resounding, yes! But just in case you need some time to mull over that question, you’ll have plenty to do so, because Lollipop Chainsaw won’t be out till 2012. For now, why don’t you check out deviantART user TRP-Chan’s ultimate tribute to Portal 2 — a Wheatley puppet that really lights up and moves!