Ousted by a German videogame ratings board and now officially confirmed by Sony, the Jak and Daxter Trilogy is a done deal. 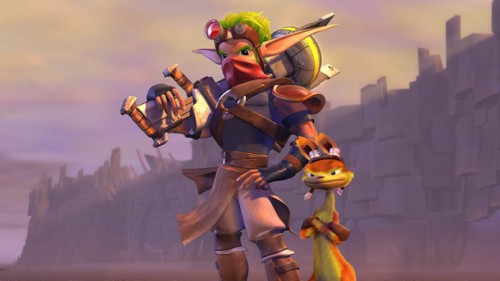 Before a little game called Uncharted put Naughty Dog studios on the map as a big-name developer, they had their hands in a prior – yet also critically acclaimed – set of PlayStation 2 exclusive titles, the platforming, at times vehicular combating, Jak and Daxter series. Now, similar to its fellow PS2 legacy brother Sly Cooper, the series is being reportedly honored with its own PlayStation 3 collection sometime in the very near future.

Entitled for the time being the Jak and Daxter Trilogy (which was the name the German videogame ratings board — image below –, along with several others, gave the game and not Sony), the collection will hopefully contain the first three entries of the series; Jak and Daxter: The Precursor Legacy, Jak II, and Jak 3, all each given a nice high-definition tune-up with some extra bonus content goodness just for good measure (like the Heavy Rain: Directors Cut, please!!!)

I now some of you out there in Internet Land won’t be happy to hear that Jak II, the black sheep amongst the three, will be apart of this trilogy (is that pitchforks and torches being picked up, I hear?), but remember friends that this — just like the Sly Cooper Collection that was released last year — is a celebration of a pretty stellar series as a whole. Which, thanks to the way our ever-progressing gaming culture works, seems to be not remembered all too well or at all.

A drat shame really, because the Jak and Daxter universe is both a brilliantly imagined and technically crafted world, a great melding of fantasy and science-fiction tropes, and most importantly, developer Naughty Dog’s much needed learning steps that would go on to help shape the Uncharted series in all it’s awesomeness. Officially the Jak and Daxter Trilogy hasn’t been announced just yet, but word from Sony themselves say that a true PR release (with price and date I hope) will be coming quite soon. So stay tuned, folks.