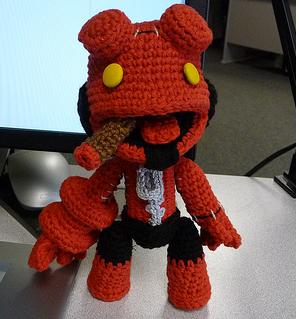 When Hellboy debuted in 1993, San Diego Comic-Con couldn’t have imagined the popularity the character would receive later. The dark mood, the supernatural adventures were a hit, but no one could guess the character would reach a cult status. We all love Hellboy for his charismatic self who carries the almost superhero halo with a massive stone hand and burning cigars in his hand.

If crochets were your thing, why not have one that is a cross between the Hellboy and Sackboy from Little Big Planet? Well, that is what is available in the market and Etsy’s sells the Hellboy-Sackboy hybrid which has been designed by Caustic Muse and is already a hit among the more serious gamers. The demonic horns, red crochet, the gleaming yellow eyes and the scary smile seem to indicate the significance of the unique hybrid of the two most loved characters from the gaming world.

Looks like any gamer who is into adventure and dramatic games would love these pieces of figurines. We do not have any idea about the availability or price of these awesome figurines. Scary figurines with some adventure thrown in are definitely the rage this season and nothing seems to be stopping them from ruling the gaming market.