If we’re just going for hype and critical acclaim, we have a serious candidate in BioShock Infinite for Game of the year 2013. And, that wouldn’t be a bad call at all. 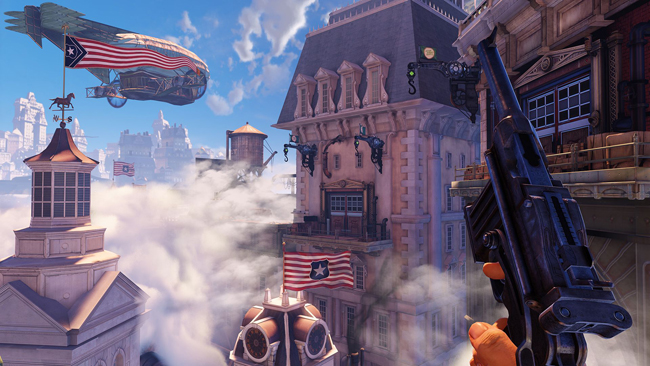 BioShock Infinite is the third entry in the BioShock series, which is at the same time, a spiritual successor to System Shock, one of the most acclaimed action-fps-rpg’s of all time. BioShock’s fame and reputation has long surpassed System Shock, and is by now one of the staples of modern gaming. As one of the most beloved series of this generation, the new BioShock had a lot of expectations put into it (especially after the good-but-slightly-underwhelming BioShock 2), and we’re happy to report it does deliver.

The game follows a new protagonist exploring Columbia, a giant city suspended in the air, and is set several years before the events in the original BioShock (although, at the same time, it is unclear if the stories do take place in the same universe or not). This might sound complex, but it only boils down to the fact that you can dive right into the game without having played or even heard of the BioShock series, and enjoy it just as much as a veteran, which is always a good thing. The gameplay is a fine mixture of shooter, RPG and puzzles that might remind gamers of masterpieces such as ICO, with a really engaging story that gamers may want to play through more than once (and not for the sake of trophy collecting!).

BioShock Infinite is getting great reviews all over the board, and from here, we can do nothing but agree with them: this is a title that shouldn’t be missed if you have any interest in modern video games at all.

You might want to read some of our other featured stories at What Tomb Raider Means for Future Female Protagonists and How To Unlock The Secret Fights In Mortal Kombat (PS3 And Ps Vita).