PS Vita Readies For The PS4 Launch With 3.00 Firmware Update

The latest firmware update for the PlayStation Vita is up, and prepares the handheld for the arrival of its next-gen home console brother. 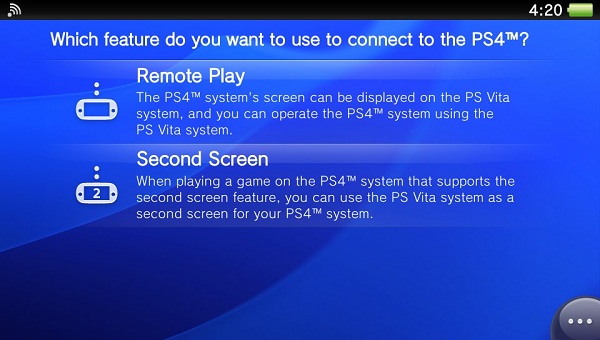 You’re not the only one who’s getting ready for the dangerously close launch of a new PlayStation system (Doritos? Check. Mountain Dew? Check. Emergency medical services on stand by? Check.) No sir-ree-bob. Sony has begun its preparations for the PlayStation 4 by sending out a new 3.00 firmware update for the PlayStation Vita that contains the PS4 Link app, which allows for remote play compatibility between the two systems.

Sony’s been touting PS4/PS Vita compatibility for throughout a good sum of the year, through media expos like E3, Gamescom, and the Tokyo Game Show. Now it’s finally time to deliver the goods though, and hopefully with the seeds finally planted, PS Vita owners should be able to remotely control the PS4, whether that be mirroring the game being played on the Vita to free up the TV for other things, or to show useful in-game info like maps and items.

Remote Play and second screen functions aren’t just a box-quote promise either, Sony worked the feature in at a baseline level, and requires all developers – first, second, or third party – to add it to any game. So expect it on every PS4 game you play, minus those titles that require camera or PlayStation Move controls to work. I can’t wait to try out this cool feature for myself; it’s the future I tells ya, the future.

It’s not all just PS4 Link jibber jabber in this specific firmware update though, not at all, there’s also a long list of improvements to the Vita’s OS for current PS Vita owners perfectly content with waiting out on the PS4 for down the road. You find their descriptions below, like new fixes to the Friends app,  party chat between PS4 users, and the blessed addition of being able to download future system software updates automatically.

PS4 Link – The PS4 Link app has been added to the PS Vita system’s home screen. With this application, you can use your PS Vita to remotely control a PS4 system, and play a range of PS4 games on your PS Vita screen. When you’re playing a game on PS4 that supports second screen features, you can also display information from that game on your PS Vita and use it as a second screen.

Parental Controls – The Parental Controls application has been added to the home screen. You can now manage the duration of game play, and the use of games and videos that have parental controls. You can also control access to certain areas of the system, including the use of the Internet browser and Location Data.

Photos – ŸA Panoramic Camera setting has been added. You can now take panoramic photos on PS Vita, and look around the photo by using the PS Vita’s built-in motion sensor.

Friends – The application layout for Friends has been improved. There are now four tabs: Find Player on PSN, Friends, Friend Requests, and Players Blocked.

Messages – The Group Messaging application name and icon have been changed to Messages. The application layout has also been improved, and you can now send and receive messages with friends and players on PS4 or on mobile devices installed with PlayStation App.

Party – The icon for the Party application has been changed. You can now voice chat and text chat with friends and players on PS4.

Content Manager – You can now use Wi-Fi to connect your PS Vita to a PS3, and transfer data between them. Your PS Vita and PS3 must be connected within the same network.‎ Also, to use this feature, the system software of the PS3 you’re using must be version 4.50 or later.

Trophies – You can now display Trophies of PS4 software on your PS Vita. Rarity of the trophy cannot be displayed.

Stay with PS3Maven for more PlayStation Vita news, where you might be able to find a DualShock 4 controller near you, and what PS3 games we want in 2014!