The My Little Pony series is meant to be for little 6 to 10 year old girls. Well everyone thought that until now. Get ready to be disturbed and utterly amazed by the Kratos My Little Pony figure. Most people, gamers, know the name Kratos from the God of War franchise. And when people say the name it’s never anything nice that comes after it since he’s now known as the ghost of Sparta. Kratos is a very evil spirit/ghost and is everyone’s favorite character in God of War.  If you’ve seen him in God of War you might remember him as an ashy grey evil god. He was fighting in the Olympus war to try and rescue his wife and daughter from Hades, another god in God of War. While in the intense battle he accidentally took the lives of his wife and daughter and was then forced to cover his body in there ashes. He then starts going after Hades to give him his soul and get his family back, which is all that he wants. In the end though, after a long story, Kratos kills Hades with the help of Athena, and makes everything better once again.

Anyway lets stop talking about God of War. Lets get into the mind of the Little Pony which is meant to be a resemblance of Kratos, and in my opinion I don’t think any little girls would like, unless their mentally disturbed and love toys that are from violent 18+ video games. But all this in a gamers eyes is just awesome, especially for a huge God of War fan like me, or you. Below is the picture of the ‘pony’. In my eyes it looks like the ghost of Kratos accidentally road killed a little adorable pony and put its soul into it. That way it could easily take revenge. 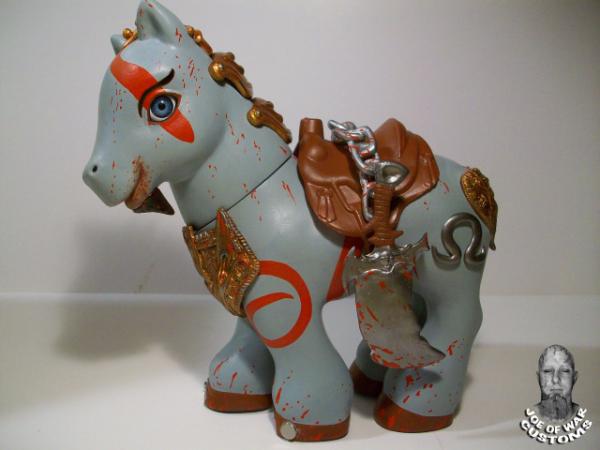 So as you can see it does look pretty strange, but as stated before even though it looks freaky, I for one love it. Over all Kratos did a good job over powering a My Little Pony because it takes a lot of strength and power to take down one of these, and I certainly couldn’t.